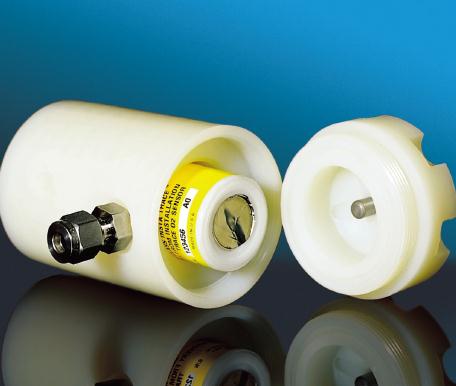 Teledyneʼs patented* innovation called INSTA TRACE ™ eliminates the greatest inconvenience associated with electrochemical oxygen sensors at the trace level – the wait. When a typical electrochemical trace oxygen sensor is removed from its barrier bag for the purpose of replacing an expired sensor, it is exposed to ambient air (209,000 ppm O2).

• No waiting
• No diverting product
• No switching analyzers
• No liquid backup

During this transition from an oxygen free environment to open air exposure, the sensorʼs electrolyte becomes saturated with dissolved oxygen – and the longer the exposure, the longer the recovery time. The typical recovery period when replacing a sensor is between 6 to 24 hours. The INSTA TRACE Micro-fuel Cell oxygen sensor is capable of measuring below 1 ppm of oxygen within 15 minutes of installation. By reducing the recovery period from several hours to just minutes, users will no longer have to divert unanalyzed product, go to liquid back-up (in the case of the air separation industry), or switch analyzers. The intrinsic value of this innovation has extreme significance in plant operation.

HOW IT’S DONE
The solution Teledyne engineered to address this recovery concern is simple yet extremely effective. By covering the base of the sensor with a seal, the cell is protected from exposure to ambient air. Insertion in the newly designed cell holder rests the INSTA TRACE sensor against a prong. As the cell holder is closed, the prong punctures the seal thereby allowing the fl ow of gas to the cathode to begin in a controlled setting. The new cell holder is designed to ensure the prong will not come in contact with the actual reactive sensing surface of the sensor.